Whenever there is an injury to soft tissue, it heals by itself over a period of time but this healing is haphazard and forms scar tissue. Scar tissue restricts the range of motion and the continuing stiffness proves to be a persistent source of chronic pain.

Our back is mainly comprised of a combination of soft tissues including muscles, tendons, ligaments and fascia. Trauma to any of these soft tissues results in symptoms usually encountered in back issues. An injury, sounding as simple as a muscle sprain or torn ligament in the back, may lead to severe pain and restrictive movements. Graston Technique may prove to be significantly helpful in this condition.

The Graston technique generally uses 6 specialized types of tools, which are made up of stainless steel and either have a convex or concave shape with round edges. These instruments not only detect the area of injury and scar tissue but also provide the needed treatment.

In Graston technique, the massage makes use of a cross-friction method, in which small degree of trauma is re-introduced in the injured tissue by rubbing or brushing against the particles of the scar tissue. This practise is based on the theory that this controlled trauma causes a mild inflammation in the area resulting in increased blood circulation which helps initiating and promoting the healing process of the injured soft tissues.

In chiropractic practice, soft tissues especially fascia are considered to be connected throughout the body known as the fascial network. In Graston Technique, treatment is given along the kinetic chain to different parts of the body that might seem far apart but are connected through the fascial network. Thus, if you are being given Graston technique therapy for back pain, be prepared for possibility of receiving therapy to hip muscles, thigh muscles, abdominal areas, shoulders and other parts of the body.

Usually, Chiropractic treatment for back pain using Graston Technique encompasses one to ten sessions scheduled over several weeks. However, still the exact number of treatment sessions for an individual will be decided by the practitioner after taking all aspects of the condition into account.

Prior to the treatment chiropractor usually advises the patient to perform 5 minutes of cardiovascular activity such as stationary bike or walking. Chiropractor may additionally apply a heat or ultrasound treatment to the affected area before applying Graston technique. 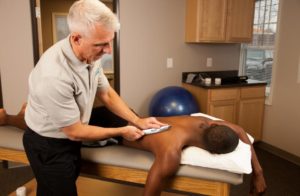 During therapy, the chiropractor uses Graston instruments to rub the affected areas using specific massage techniques. Usually a single area is treated for approximately 30 to 60 seconds. Some discomfort during the procedure is expected and usually tolerated well by the patients. Practitioners mostly advise icing of the treated area(s) after few hours of the treatment.

After the procedure, you may feel a little sore, and bruises or small bluish or reddish marks may appear at the site of therapy called petechial spots. These are usual findings and subside early. In the following days, your chiropractor may advice you to follow an exercise or stretching program for earlier recovery from the back injuries.

The Graston Technique may be used as a sole treatment or in conjunction with other therapies. It promises many benefits to the patient with back and neck injury including:

There are some conditions in which Graston  is not advisable such as open wounds in the area, complicated fractures, and some types of cancers, hypertension (high blood pressure), pregnancy, and people taking blood thinners.